Producing high-quality original content is expensive, so Netflix analyzes its vast collection of data to increase the odds of creating content that appeals to its subscribers. With subscribers presented with nearly unlimited options, why leave such a potentially critical aspect completely to chance? After all, Netflix possesses the data to make the most informed business decision possible.

In a previous Blog Post we talked about how Netflix is using massive amounts of data to make intelligent decisions on creating original content.

– Are certain customers trending toward specific types of covers? If so, should personalized recommendations automatically change?

– Which title colors appeal to which customers?

– Is there an ideal cover for an original series? Or should different colors be used for different audiences?

Look at the covers of their original series House of Cards, and the 2010 version of Macbeth that ran on the PBS series Great Performances.

They are very similar in terms of color balance, contrast, and visual field. They both display older white men with blood on their hands(Kevin Spacey and Patrick Stewart). Both images have primarily black backgrounds, and use a very similar color pallet. 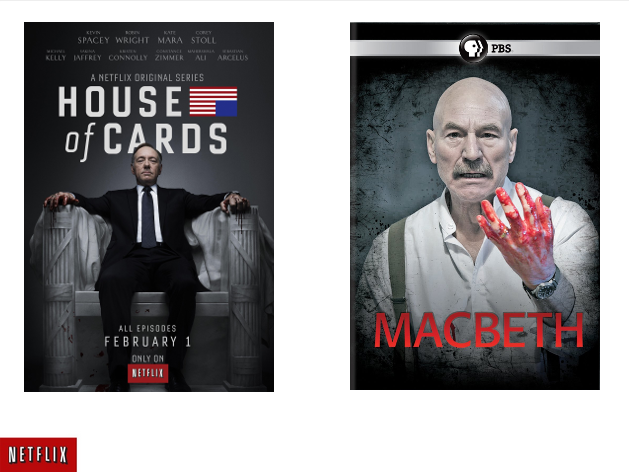 The covers of the two shows are much more similar than dissimilar. However, subtle differences do exist between the two images, and Netflix can precisely measure those differences. The next image details how Netflix visually interprets the data from those images. 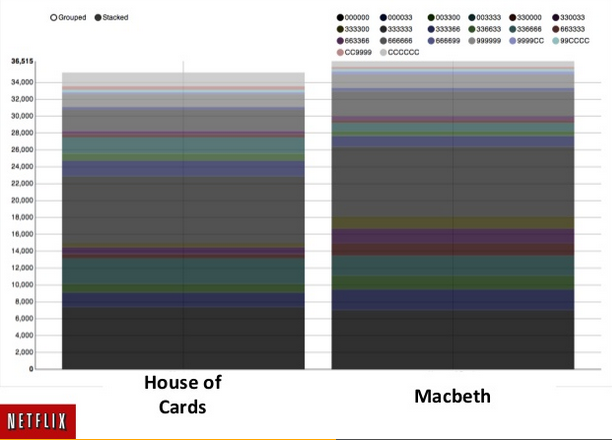 Netflix measures if the similarities and differences have any quantifiable impact on subscriber viewing habits, recommendations, and ratings. Management teams carefully review this data when selecting the covers for their original content series.

What is next? Comparing the visual contrast and hues of images isn’t a one-time experi­ment for Netflix, it is a regular component of their strategy. Netflix recognizes that there is tremendous potential value in these discoveries. To that end, the company has created data analysis tools to unlock that value.

At the Hadoop Summit in 2013, Netflix employees Magnusson and Smith talked about how data on titles, colors, and covers helps Netflix in many ways. For one, analyz­ing colors allows the company to measure the distance between customers. It can also determine, the “average color of titles for each customer in a 216-degree vector over the last N days.”

A great example of a company transforming data into intelligent, game-changing results.