How Voice Technology and Chatbots will Influence Marketing in the Future 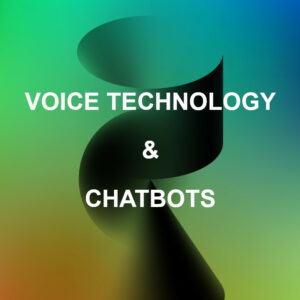 The number of people using conversational AI tools, such as voice assistants and chatbots, is rapidly growing and redefining the relationship of users with technology. Voice technology has become the most disruptive force to hit the world since the internet became a visual medium. Voice assistants and chatbots have become an additional interface for marketing purposes. It brings an entirely new way of interacting with customers and adds a higher value to their experience.

123.5 million US adults will use voice assistants at least once per month in 2022. That number is expected to grow to approximately 50% of all US adults in the next 3 years.

Some of the most well-known and widely used voice-activated assistants include:

ChatGPT is a variant of the GPT (Generative Pre-training Transformer) language model, which was developed by OpenAI. It is a machine learning model that is designed specifically for chatbot applications and is able to generate natural-sounding responses to a wide variety of inputs. The goal of ChatGPT is to make AI systems more natural and safe to interact with. The services ammassed millions of users in less than 1 month.

While ChatGPT is not a traditional voice-activated assistant like Alexa or Siri, it is capable of generating text-based responses to user inputs and can be used in a chatbot application that allows users to communicate with it using natural language. It is not designed to be used with voice input, but rather is intended to generate text responses that can be displayed on a screen or presented to the user in some other way.

Google’s management has reportedly issued a ‘code red’ amid the rising popularity of the ChatGPT AI. The move comes as talks abound over whether ChatGPT could one day replace Google’s search engine.

Sridhar Ramaswamy, who oversaw Google’s ad team between 2013 and 2018, said that ChatGPT could prevent users from clicking on Google links with ads, which generated $208 billion in 2021(81% of Alphabet’s overall revenue).

Google has a similar technology called LAMBDA. LAMDA is a machine learning model developed by Google for natural language processing tasks. It is a variant of the Transformer model, which is a type of neural network architecture that is particularly well-suited to processing and generating large amounts of text data.

LAMBDA is an acronym that stands for “Language Model-Agnostic Meta-Learning.” It is designed to be able to quickly adapt to new tasks and languages by learning from a small amount of labeled data, and it has been shown to be effective at a wide range of natural language processing tasks, including language translation, language modeling, and text classification.

Google LAMBDA is part of the Google AI research group and is used in a variety of applications, including machine translation, language understanding, and chatbot development. It is a powerful and flexible machine learning model that has the potential to significantly advance the state of the art in natural language processing.

Google is hesitant to release its AI chatbot LAMDA to the public in its current state over concerns over “reputational risk” due to its high margin of error and vulnerability to toxicity. Like most technologies, this tech can be abused.

Your content marketing and editorial strategies should reflect how your business plans to leverage the technology and how invested you are in it from a content point of view. For most businesses voice and chatbot marketing should start with “search”. 2022 saw over one billion voice searches conducted in a month. Content marketers must emphasize short-form content products that offer quick and crisp answers to users to engage consumers.

SEO techniques can be used for voice activated search results becuase search results from Siri, Cortana, and others frequently use Google’s featured snippets. When focusing on voice-search optimization, it is essential to remember that the virtual assistant can only deliver a single search result per request. Marketers should adopt SEO guidelines related to spoken word search behaviors and informational needs.

Please remember that voice assistants and chatbots will soon become an additional interface for marketing purposes. It brings an entirely new way of interacting with customers and adds a higher value to their experience.