“Facebook has been lying to the public about the scale of its problem with fake accounts, which likely exceed 50% of its network. Its official metrics—many of which it has stopped reporting quarterly—are self-contradictory and even farcical. The company has lost control of its own product.” 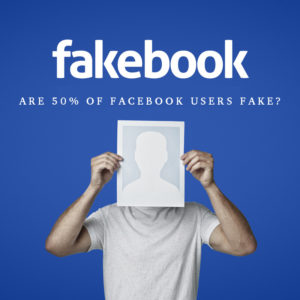 It is widely accepted that a large portion of accounts on Facebook are fake, and our position is that a large potion of advertisement budget spent on Facebook is worthless because it gets consumed by click-fraud farms. But the problem may be bigger than we thought. Following Facebook’s horrible 2018 year, a report released on Thursday, Jan. 24, 2019 suggests as many as half of Facebook’s two billion accounts are fake or duplicates.

According to Aaron Greenspan, the platform’s measurement of its user base isn’t—and will never be—precise enough. Therefore, the metrics they report are overestimated.

The report also comes with a disclosure that reads: “Aaron Greenspan owns FB put options in his personal capacity. He entered into a confidential settlement with Mark Zuckerberg and Facebook, Inc. in 2009.”

The fake accounts are particularly dangerous because they “often defraud other users on Facebook, through scams, fake news, extortion, and other forms of deception” and often “involve governments,” he writes.

He further accused the company of “selling” ads to “hundreds of millions of phantom buyers – users who do not actually exist.”

How can any social media company verify a “real identity” from a fake identity? The only way to do so is to institute a process much like opening an online bank account, a process that requires some form of deeper identification.

If you use Facebook at all, you have most likely received a friend request from someone you don’t know. If you research that user account, chances are you will find it is an account that has few if any photos posted, few posts, and very little engagement on any content on that user’s wall. It is a fake account. Fake accounts are big business, and Facebook is not doing enough to stop the proliferation of fake accounts on its platform.

In future blog posts I will dive into specific examples of why advertising on Facebook can be a complete waste of money, including an example of promoting a video on Facebook that generated over 40,000 views but did not result in a single phone call. This led to a very interesting discovery of how Facebook counts “views”, resulting in view counts that are exponentially inflated.

I believe Facebook can not be fixed, at least not without new senior management in place. A new social media platform is needed that demands arduous verification and constantly monitors its user base to eliminate cloned and fake accounts. The number of “real” accounts in such a network would be a fraction of what Facebook reports its user base is, but users could actually trust that new platform. Advertisers would be able to trust that a large percentage of their advertising dollars are being consumed by click-fraud farms.