The slow and steady decline(death) in organic Facebook reach began in 2014, when Brian Boland, Facebook’s VP of Advertising Technology (at the time), said Facebook is simply managing more ad content than it used to, and News Feed space is thus more competitive among marketers. 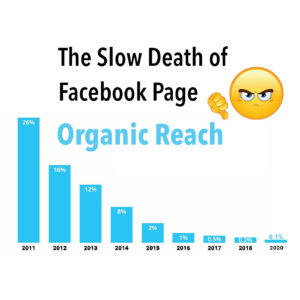 As a result, brands have to spend more on paid advertising to get the same reach they use to enjoy by posting on their Facebook Page. This trend started in 2014 and has steadily declined every year since then. At the time of this article, it would surprising if a business or brand could generate meaningful organic reach from posts on their Facebook page.

Facebook still has the largest user base among all the different social media channels. With over 2 billion users worldwide (and counting), marketers are hoping they’ll find their target audience here. Keep in mind that it is estimated that more than 50% of Facebook user accounts are fake.

However, it is increasingly difficult to reach a target audience on Facebook by just posting to a business’s Facebook Page. This benefits Facebook financially as marketers must turn to boosted posts and advertising which generate revenue for Facebook.

Organic Reach on Facebook is simply a measurement of how many people can find you on Facebook for free. It’s much like organic rankings on a search engine, although in the case of Facebook it’s based on aspects like popularity, post frequency, and other contributing factors. Organic reach is the number of users that see a post that has not been promoted or “boosted” using Facebook’s advertising solutions.

According to Mark Zuckerberg, there’s a good reason for the death of Facebook’s Organic Reach:

“Recently we’ve gotten feedback from our community that public content — posts from businesses, brands, and media — is crowding out the personal moments that lead us to connect more with each other.”

Specifically, Zuckerberg wants Facebook to be better geared to curate content that builds meaningful relationships. Despite the substantial drop in Organic Reach beginning in 2014, Facebook and Zuckerberg still think that there’s too much Organic Reach for a Page.

With Organic Reach now below 2% Facebook is nearing the end of the road in terms of being a viable option for marketing your brand or reaching your target market on social media.